5,000 smallholder farmers from the Mulindi tea factory and field unit in Rwanda recently gathered to celebrate the significant progress in their tea farming activities and communities and to thank The Wood Foundation for their continued support.

The Wood Foundation Africa (TWFA) has worked with smallholder tea farmers in East Africa since 2012 and, over the last six years, it is fair to say that TWFA tea industry initiatives and projects have had a very significant impact on 60,000 farmers and homes which, with an average family of 6, equates to 360,000 people in the region.  Additionally, as a direct result of the Foundation’s interventions, the economies in the target regions of TWFA’s main countries of activity, Rwanda and Tanzania, are being transformed with change that is both long-term and sustainable. 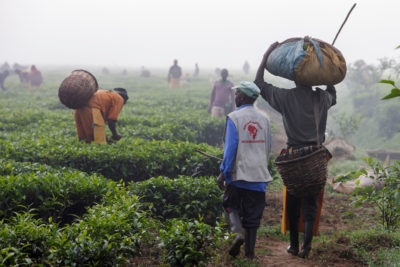 One of the first significant commitments was the acquisition of 60% of each of the Mulindi and Shagasha tea factories in Rwanda by EATI, a charitable company which is jointly owned by TWFA and Lord David Sainsbury’s Gatsby Charitable Foundation (Gatsby).

Since acquiring the Mulindi facility, significant investment has been made to modernise equipment and activities in the field and factory.  Smallholder farmers’ income has almost trebled, and 7,000 farmers have graduated from TWFA run Farmer Field Schools for Mulindi and the sister factory at Shagasha. 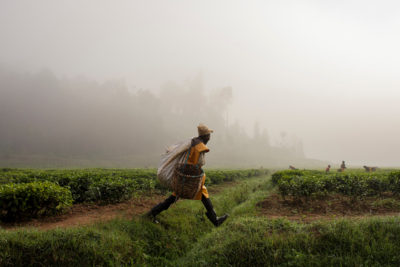 Currently there are approximately 6,000 smallholder tea farmers supplying each of the Mulindi and Shagasha factories.  These smallholders have a 40% stake in both factories which will be handed over when specific financial and governance criteria are met.   Although the task is only half way through, the tea farmers wanted an opportunity to celebrate their hugely improved circumstances and say thank you. 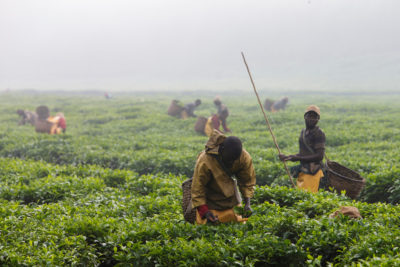 On Tuesday 30th January, 5,000 smallholder farmers attended the celebration ceremony at Mulindi Tea Factory, many of whom had walked overnight to get there.  Everyone was incredibly enthusiastic and grateful for the impact TWFA activity and investment is having on their ability to significantly enhance their farming prowess and subsequently their income from tea growing. 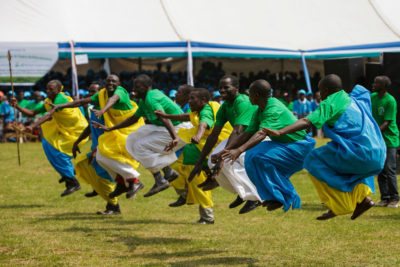 During the four hour event there were various speeches from dignitaries along with much singing, dancing and testimonies from the farmers.  Prizes, including livestock, were also awarded to the farmers in recognition of their enhanced performance, as well as a number of training awards.

Sir Ian Wood, Chairman of The Wood Foundation, led the celebration, along with David Knopp, Director of Africa for The Wood Foundation Africa, and other members of the TWFA management team.  The celebration was also attended by Gerardine Mukeshimana, the Rwandan Agriculture Minister, Bill Kayonga, CEO of the National Agricultural Export Development Board, the Regional Governor and other Rwandan dignatories. 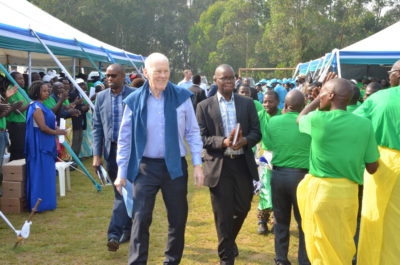 Tuesday’s event followed a very successful celebration at TWFA’s Shagasha Factory in November where 4,500 smallholder farmers were in attendance.

“Our vision is to develop farmers as individual small business men and women, while creating a world-class smallholder tea operation in Rwanda that provides meaningful and sustainable financial returns for farmers.  This investment is all about the farmers but it is not a quick win, it has taken hard work, patience and time of all involved. Only through professional management and good governance will our vision come to full fruition.

We are now starting to see the positive impact of our interventions for both the farmers themselves and the region in general.  Our activities with smallholder tea farmers in East Africa provide a very successful example of the systemic and sustainable change that can be achieved through effective venture  philanthropy.  We have combined sound business principles with patient capital investment to enable and empower whole communities.  What we are achieving in East Africa is a fraction of what could potentially be done by a much wider philanthropic effort, and we would wish to encourage other people to consider rural Africa for their philanthropic investments.”